As a result of rapid growth in Tools to Work’s activities in recent years, the charity was approaching its limits in terms of both space and capacity. Based on advice from consulting firm Groenewout, Tools to Work has been able to make substantial logistics improvements. The result: shorter lead times, less stock and more space. “We’ve professionalized our approach,” says Luitzen Wobma, Managing Director of Tools to Work.

Each year the Dutch charity Tools to Work repairs and refurbishes around 24,000 pieces of tools in sets, 500 sewing machines, 60 knitting machines and various other types of second-hand equipment. The items are sent to developing countries in Africa and also to people in need in The Netherlands. “Last year we supplied 156 computers and 82 bicycles to the Dutch charity Stichting Leergeld, for example, for families who can’t afford to buy a computer or a bike. And Dutch railway company NS has just given us 600 bicycles that have become obsolete in its public bike-hire scheme. After refurbishment, we will be sending 140 of them to a bakery project for women in Sierra Leone, and a further 150 of them to Mozambique to be used as pedicabs,” says Wobma.

The repairs and refurbishments are carried out at a facility in Teteringen by approximately 55 volunteers plus 25 people who are being prepared for re-entry into the job market by Tools to Work. In recent years, the organization was increasingly approaching its growth ceiling. “We have doubled in size since moving into these premises eight years ago. Up until recently, our warehouse was completely full and we were failing to refurbish sufficient tools fast enough. It became clear that we were doing something wrong,” comments Wobma.

Tools to Work enlisted help and professional advice from consulting firm Groenewout. The contact between the two organizations stemmed from 2007, when Groenewout founder Cor Groenewout – who is still involved with Tools to Work to this day – helped the charity to move into its new-build premises.

In just a short space of time, a Groenewout consultant identified the logistics bottlenecks and suggested solutions, all for free.  “That was an impressive outcome which has enabled us to make substantial improvements,” explains Wobma.

Based on Groenewout’s advice, the first step was to tidy up in the warehouse. With its attitude of ‘It’s a shame to throw this away’, the charity had accumulated many items which had been lying idle for years. “We took those items to the recycling centre, which not only created extra space but also generated extra income for us. We now sort incoming items as soon as we receive them and we only store what we can use. The extra space in the warehouse has also enabled us to structure our stock much more effectively, such as by sorting computers based on age or date of receipt,” continues Wobma.

On the warehouse floor, the amount of work in progress has been reduced, including in the packing department which produces the wooden crates for shipment of the tools and machines. “There was a drop in demand for sewing machines last year but the production of crates for them continued as before, resulting in a surplus of crates. Our packing department now takes a demand-based approach which has considerably reduced the working stock. Nowadays, our people no longer merely do what they enjoy, but rather first and foremost what is necessary,” says Wobma.

Another important improvement has been the creation of a picking aisle in some of the newly available warehouse space, specifically for putting together toolboxes. “We are currently working to supply 125 carpenters’ toolboxes which each comprise 45 different tools, ranging from hammers and screwdrivers to various types of saws. The picking aisle means that the toolboxes are put together in a more structured manner and hence more efficiently.” 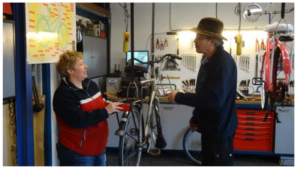 Starting each day with a tidy warehouse

Thanks to Groenewout’s suggestions, the lead times have been shortened, the stock has been reduced and more space has been created in the warehouse. “Another solution from Groenewout related to keeping workspaces tidy and the floor clean. We already did that to a certain extent, but we’ve made further improvements. We now start each day with a tidy warehouse,” comments Wobma, who reiterates how pleased they are with Groenewout’s help. “We’ve significantly improved our processes in a short space of time. We’ve now really professionalized our approach.”

Marcel te Lindert is a journalist with over 20 years of experience in logistics. He was editor-in-chief of the Dutch magazines Transport+Opslag and Logistiek. Today he works freelance for magazines like Supply Chain Magazine and Logistiek Totaal.

If you have any questions or if you would like to offer your feedback on this article, please contact Mari van Kuijk, vankuijk@groenewout.com / tel. +31(0)76 533 04 40.