Kramp is an ambitious, internationally active wholesale company. By 2020 it intends to be generating one billion euro in revenue – a third more than in 2016 – and then to continue growing. To facilitate that, Kramp enlisted Groenewout’s help in drawing up a ten-year plan for expanding its supply chain capacity. One stage of that plan is already underway: extension of the warehouse in the Dutch town of Varsseveld including a shuttle system for 130,000 trays.

Kramp just keeps on growing. The internationally active industrial wholesale company has ten warehouses throughout Europe which, between them, handle 100,000 to 150,000 order lines a day. This generated 736 million euro in turnover last year. “In 2020 we want to break through the billion euro mark – not only by increasing our share among existing customers but also by attracting new ones,” says Jan Frans Berends, Director Logistics for Kramp in the Benelux region.

For that revenue growth to be possible Kramp’s distribution network has to grow too, which is why the board of directors commissioned a distribution network study for which they enlisted Groenewout’s help. “Where can we find new customers? And where do our warehouses need to be in order to provide fast and efficient customer service? Groenewout helped us to find the answers to these questions,” states Berends.

Groenewout worked with Kramp to prepare an overview of the desired service levels for each country. The consultancy firm also analyzed which items must be kept in stock at local level, European level or perhaps not at all – in other words, which product range should each warehouse carry? Last but not least, Groenewout not only evaluated the optimal location for each warehouse, but also how each one should be designed to provide the necessary capacity. All this resulted in a supply chain plan for the next ten years, aligned with the sales forecasts and the predicted evolution of the product range.

“There are significant growth opportunities in Eastern Europe, especially in the agricultural sector. We’re growing very rapidly in Poland, and there’s a lot happening in Romania and Turkey too,” continues Berends.

Order picking from a shuttle system

Kramp is not only focusing on new markets and new warehouses, but also on its existing warehouses such as the one at the company headquarters in Varsseveld. That warehouse is in urgent need of expansion. “First and foremost because we’re getting very close to the limits of our order picking capacity in Varsseveld; we can’t process enough orders. Secondly, we’re short of storage space, especially since the product range is growing all the time. We’re full, it’s as simple as that,” explains Berends. He readily admits that he received support from Groenewout for this project: “We don’t profess to have all the necessary knowledge in house. At Groenewout they are specialists in this area, they know what the material handling market has to offer right now and they can help us to think about various expansion scenarios. Besides that, we regard it as important to develop an outside-in perspective. We do so by actively exploring the market ourselves, but also by bringing in external knowledge.” 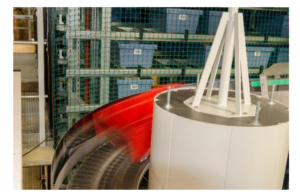 Berends is particularly impressed with Groenewout’s role as a sparring partner. “That opened up new insights for us. For example, we waste a lot of time manually replenishing the pick inventory in our semi-automated order picking zone. We want to automate that process as much as possible by placing the bulk inventory into the red trays right from the start.

Analysis of product range and conveyors

Kramp is currently building a new facility next to its warehouse in Varsseveld in order to house the shuttle system. The system will initially contain 134,000 plastic trays, with the option to increase this number to 300,000 later. “If our estimations are correct, the 134,000 trays will all be full by late 2020/early 2021,” explains Berends.

“As we speak, our project team comprising people from Kramp and Groenewout is analyzing which items from our product range should be picked where. The eight order picking stations will offer capacity for 2,400 picks per hour and we need to make the best possible use of that, of course. At the same time, we can’t pick everything from the shuttle system; shuttle system locations are not at all cost effective for slow movers, for example.”

Another consideration is the number of trays that the conveyor systems will have to handle. Is the current capacity sufficient, or does that need to be expanded too? “To answer that question, Groenewout is looking at things like how orders are released in our warehouse management system. That determines how many trays will be moving around on the conveyors at peak times.”

The new shuttle system is being implemented by Knapp. “We benefited from the experience with our existing shuttle system, which was sourced from a different supplier, in the selection process. A number of wants and needs have arisen, and they will be addressed in the new system. We selected the new supplier based on their ability to do so,” comments Berends.

Kramp intends to convert the existing system, which has a capacity of 8,000 trays, into an outbound buffer zone. “We can use it to consolidate orders from the various picking zones and hold them temporarily until dispatch. It will also enable us to spread the workload more evenly throughout the day by pre-picking some of the orders in the morning. Then, if a customer places an extra order later that day, we can retrieve the tray from the outbound buffer zone and send it back through the order picking systems.”

Kramp also benefited from Groenewout’s expertise during the supplier selection process and contract negotiations. “Groenewout has relevant experience and regularly meets with our legal department to document various agreements. For example, this also means that we formulate all the processes as specifically as possible beforehand to avoid being faced with unexpected surprises – and hence extra costs – in the realization phase,” says Berends, who also expresses his satisfaction with the external support provided to Kramp. “The people from Groenewout are part of our project team. It’s an open and smooth-running partnership.

The project lead from Groenewout has short lines of communication with the specialists within the consultancy firm so he is also able to substantiate any new insights with the relevant information. That strengthens trust.”

Marcel te Lindert is a journalist with over 20 years of experience in logistics. He was editor-in-chief of the Dutch magazines Transport+Opslag and Logistiek. Nowadays he works freelance for trade magazines including Supply Chain Magazine and Logistiek Totaal.