Hollister recently moved into its brand-new European distribution center in Oud-Gastel in the Netherlands. To realize this new-build project, the company enlisted Groenewout’s expertise – and not for the first time. Job Sonke, Manager of the Hollister European Distribution Center: “An excellent decision that has once again paid off.”

Hollister is an independent US-based company that develops, manufactures and markets healthcare products worldwide. The products are shipped to the European Distribution Center (EDC) from the production facilities in the USA, Ireland, Denmark and India. The EDC then takes care of onward distribution throughout the entire EMEA region. 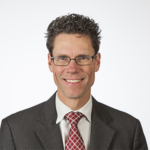 Following many years of sustained growth, the company had outgrown its previous EDC in Etten-Leur. “Our company is growing, so it’s only logical our distribution capacity needs to keep pace. But that was becoming increasingly difficult,” says Job Sonke, Manager of the Hollister European Distribution Center. “We’d already utilized all the expansion opportunities, like adding a mezzanine. We had to lease external storage space, despite it reducing our efficiency and incurring unnecessary costs. We were also forced to take a very cautious approach to supplementary activities and further growth. We simply didn’t have enough space to offer extra value-added services.”

Against that backdrop, and in the knowledge the lease contract for the EDC in Etten-Leur was up for renewal, Hollister asked Groenewout to help investigate and select a new, bigger location. “We’ve been working with Groenewout for over a decade.

They were a great help to us in 2007 during the construction and design of our EDC in Etten-Leur. They are familiar with our organization and also know which decisions we’ve made in the past and why. That makes it very easy to communicate,” adds Sonke.

During the most recent collaborative project, Groenewout conducted an up-to-date review of the Hollister European distribution network, taking the company’s future production locations into account. The study reconfirmed the desire of Hollister to keep the EDC in the West-Brabant region. “We were very keen to retain all of our Etten-Leur Associates, but we also had to demonstrate that it was the best location from an economic perspective,” continues Sonke. “The central position between the world ports of Rotterdam and Antwerp, the proximity to the airports in Amsterdam and Brussels, and the motorway links to western and southern Europe all mean West-Brabant is still the most ideal location for our activities.”

Groenewout also handled a more detailed location study and of selecting the right developer. The consultancy firm examined how well the available locations in West-Brabant matched the Hollister search criteria. “They looked at things such as the amount of land, the possibilities for expansion, and the distance from our existing location,” explains Sonke. Groenewout also supervised the commercial process to arrive at a sound development and lease contract, including negotiating the rent. The chosen developer was HVBM Vastgoed, which developed and completed the new facility within a year.

The new EDC on the Borchwerf II industrial estate in Oud-Gastel is based on a build-to-suit concept and meets all of the wants and needs of Hollister. With 30,000m2 of warehousing space and a further 3,560m2 on the mezzanine floor, the distribution center offers enough room to perform the value-added services in addition to the warehouse activities. “The warehouse design also enables us to make new efficiency gains,” says Sonke. “For example, a conveyor system will further increase our picking productivity and ensure we stick to the cut-off times even more precisely.”

Moreover, the BREEAM-certified facility supports Hollister in achieving its sustainability objectives. The project took the future into consideration in other respects too. For example, the extremely level floor in the EDC opens up the opportunity to create a narrow-aisle warehouse without any problems in order to further increase the storage capacity. Moreover, if the growth continues, the new Hollister facility in Oud-Gastel can be extended relatively easily, because an extra 11,000m2 unit has been built at the EDC and Hollister has an option on it for the next five years. 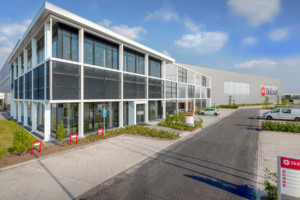 As manager of the European distribution center, Sonke is happy with how the partnership with Groenewout went: “The project was completed on time and on budget, and without having any impact on our service. Our lease contract on the old EDC expired at the end of April 2018. The new building work was completed at the end of 2017 and we’ve been serving our customers from our new home since March 2018.

That is largely thanks to the effective and pleasant collaboration with Groenewout. They have various specialists in-house for the various project phases, and every one of them has a wealth of experience and the right expertise. Once again, we were able to completely depend on those experts. Throughout the entire process we constantly felt as if the Groenewout project team were an extension of our own organization. They take a proactive, problem-solving approach and coordinate things carefully.”

Mark Dohmen has been a journalist in the logistics sector for more than 20 years. After his degree in logistics management, he worked as an editor of the Dutch trade magazines called Transport+Opslag and Logistiek, and he was chief editor of Warehouse Totaal. Nowadays he works freelance, including to produce articles and videos for logisticsinside.nl.

We're not around right now. But you can send us an email and we'll get back to you, asap.