Logistics to have an even greater impact on company success 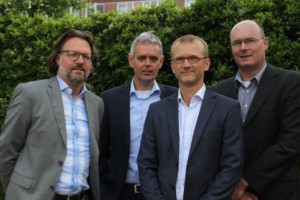 From linear supply chains to autonomous networks, and from a cost to a competitive weapon – in 2016, the year in which consultancy firm Groenewout celebrates its 50th anniversary, the logistics profession is once again facing a major period of transition. The four partners at Groenewout discuss the second ‘revolution’ that has just got underway. “Everyone knows what logistics is nowadays because everyone’s received a parcel now and again.”

Strictly speaking, the logistics profession didn’t even exist 50 years ago. Back then it used to be referred to as transport and warehousing, or perhaps business administration. The profession as we know it today only first began to take shape in the 1980s. One of the pioneers was Eliyahu Goldratt who published a management-oriented novel called ‘The Goal’. “He was one of the first to explore what we really needed to store and how we could translate a sales forecast into a production plan and subsequent purchasing plan. It suddenly made sense to start using statistics, for example,” says Alain Beerens, one of the four partners at Groenewout together with Mari van Kuijk, Arthur Zondervan and Wendel Dijker.

We're not around right now. But you can send us an email and we'll get back to you, asap.

Data integrity continues to be neglected in supply chains