Benefits of BREEAM vary from one warehouse to another 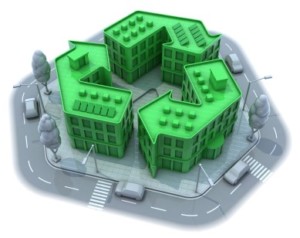 It should come as no surprise that BREEAM certification is hugely popular within logistics, because in this sector in particular a three-star rating is within easy reach thanks to lots of ‘low-hanging fruit’. However, there are a few hidden pitfalls, including ones related to benchmarking and the fiscal benefits that are associated with BREEAM certification. The number of BREEAM-certified square meters in the industry is rising rapidly. At the start of this year the figure stood at around three million square meters and, if the trend of the past couple of years continues, that will increase by approximately one million square meters each year. The large majority of that growth will come from logistics-related square meters.

It is not really surprising that BREEAM certification is so popular in the logistics sector. Logistics real estate is in high demand, as demonstrated by the record figures for its uptake. Thanks to the low interest rate, new-build projects are more attractive now than ever before and often make more financial sense than renovating or extending existing warehouses or distribution centers. Furthermore, a BREEAM rating helps the real estate to retain its value, even if the company has to move out five or ten years down the line. And let’s not forget the lower running costs, because thanks to all the sustainability measures the energy consumption is much lower than that of a conventional building.

What makes BREEAM certification so interesting is its underlying independent assessment method which enables buildings to be benchmarked in terms of sustainability – and that’s an important issue for property investors, for example. With a market share of 63 percent, BREEAM is the most widely used assessment method in Europe which makes this method even more valuable.

However, there is a side note. In addition to fixed criteria, the BREEAM assessment method also includes a number of variable criteria that are based on the government’s minimum requirements. One example is a building’s predicted energy consumption, for which the government has laid down certain criteria in the Energy Performance of Buildings Directive. The BREEAM certificate awarded to a building – which varies from a one-star (pass) to a five-star (outstanding) rating – is partly dependent on the percentage of the building that scores better than those criteria.

In other words, if the government decides to raise the legal minimum, the BREEAM requirements will change accordingly. That means that if the reference values are altered, the same building could end up complying with the legal minimum within a couple of years and hence no longer qualify for a certificate.

In more general terms, different buildings that have been BREEAM-certified in different years cannot necessarily be compared with one another.

Government subsidies make BREEAM certification particularly interesting from a financial viewpoint. A large number of measures that companies have to take in order to meet the criteria – such as LED lighting or a thermal energy storage system – are eligible for the energy investment allowance (EIA) scheme or the environmental investment allowance (MIA) scheme. The subsidies are so generous that the total investment for a BREEAM-certified building is often lower than that required for one without the BREEAM label. Companies that don’t opt for certification miss out on lucrative financial opportunities.

But there is a hidden pitfall here too. The size of the impact of government subsidies on the investment costs depends on the specific situation. Determining factors include, among other things, the number of square meters and the number of BREEAM stars, as the illustrative calculation below shows. After subsidy, a company that builds a 30,000-square-meter warehouse sees its investment costs decreasing more with each extra star. That makes it cheaper to build a four-star warehouse than a three-star one, even though that also entails extra sustainability measures. However, the same rule of thumb does not apply if the warehouse measures just 5,000 square meters. In that case, each extra star really does cost more money. The cut-off point is at around 10,000 square meters.

Companies that are determined to achieve the maximum number of stars (five) end up spending the most in both cases, irrespective of whether their warehouse is bigger or smaller than 10,000 square meters. However, that doesn’t mean that it is not worth opting for five stars. After all, the illustrative calculation above does not include the running costs. If a five-star rating results in a further decrease in the running costs thanks to lower energy consumption, the total costs can still end up lower when viewed over the entire lifetime of the building.

Do companies applying for a BREEAM rating incur lots of extra costs? Not necessarily. A large number of measures fall into the category of ‘low-hanging fruit’, meaning that companies don’t have to spend much time or money to reap significant benefits. Click here for an overview of low-hanging fruit for a three-star BREEAM rating.

Is certification a must? No, but it is strongly recommended. In the case of larger warehouses, it is often cheaper to invest in a BREEAM-certified building than not, despite all the extra measures that have to be taken. Moreover, a three-star rating often involves a fairly limited amount of extra effort. And besides that, lower energy consumption results in lower running costs.

Furthermore, certification ensures that a building holds its long-term appeal. It shows that the building complies with higher standards than the minimum requirements as stipulated in the national building regulations. The building is not only demonstrably sustainable, but can also be benchmarked against other buildings which makes a warehouse attractive in the eyes of property investors.

Apart from financial benefits, BREEAM also offers a large number of advantages that are more difficult to quantify in monetary terms. A BREEAM-certified building boosts employee productivity and health thanks to all the extra attention paid to the indoor climate, the air quality and the amount of natural light – so, sooner or later, companies reap the benefits from those aspects too.